It seems Virtual Reality is gaining popularity again. I remember back in the 90' when VR was the big hype, but never took off because og the lacking hardware - both to produce the images fast enough as well as capturing user input accurately enough. There was also the problem with lag since the hardware available needed time to crunch the numbers.

Nowadays there's no question of the hardware being powerful enough and as we've seen the last couple of years the sensor technology and finding innovative ways of deploying it certainly has improved.

A while ago I came over the VR game gun which shows how "easy" it is to use off the shelf components and software and make something quite cool - as long as you have an idea.

This system, although functioning, would require a very larg venue to be practical so keeping yourselfe stationary, but still moving around in the virtual environment has been one of the other big issues needing solving. Creating a big sphere, ie a gigantic hamster ball, where you can round around inside is not a new idea, but I haven't seen anyone actually creating such a device until now.

My biggest concern about this sollution is momentum. No matter what material you decide to use to construct the sphere it will have considerable mass and coming to a complete halt after running will test your balance. I would love to try it out though :)

More information at the VirtuSphere homepage.
Posted by Atle at 09:38 No comments:

Wohoo! I received my package from Sparkfun today. It was packed with no less than three Arduinos (mega, pro 328 and pro mini 328) as well as an Arduino shield, 6-degree gyro parts and a MaxSonar ultrasonic range finder.

I've coded and scripted in quite a few languages up through the years, but I have never done anything with micro-controllers so I'm definitely jumping into the deep end with this. Should be fun :)

Looking out the window from my living room It was hard not noticing these clouds colored by the setting sun. They might as well be taken straight out of an old Disney movie :)

Riversimple has a new car project in the works. Although "open source" cars has been tried before this one is particular interesting since it's based on fuel cell technology. Also; they're planning to produce the car and you can lease it from them as well. If you choose to lease it over 20 (!) years they'll even throw in the fuel for free. 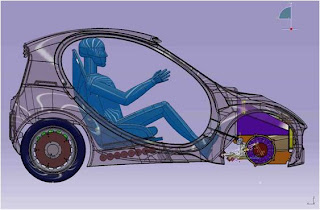 As an urban car I think it might be successful, but for longer trips it might have the range, but not the baggage capacity.

Article about the project can be found at Autocar.co.uk.
Posted by Atle at 15:24 No comments:

Shai Agassi has come up with the most brilliant way of speeding up the change to zero-emission cars i.e. electric cars. I believe the biggest hurdle is price. People will say that they care about the environment and the future of the planet, but in reality it's only up to a point. They will always go for the cheaper alternative - as long as the price difference is more than negligible. In his talk Shai shows how you can split the car from the battery and make the electric car more economic to buy and use than one running on gasoline.

However, there's still the issue of battery production and CO2 (and other environmental toxins) linked to that, but I believe you have to start somewhere and he has some really good solutions to how to best get more environmentally friendly cars accepted in the first place. Once the ball get's running we will for sure find better ways to store the electric energy than the current variety of batteries.

[UPDATE]
I came over an article in Wired today about the startup company Better Place - founded by Shai Agassi. They were showing off their fully automated battery-swap station. Now, if we only can get all the auto-makers to standardise one battery system...
Posted by Atle at 21:54 No comments:

Working in the VFX industry I'm always on the lookout for new technology or techniques. Yesterday I came over this new system for doing motion capture that shows a lot of promise.

Basically, instead of using infrared cameras and ping pong markers or magnetic sensing, this system consists of several ir projectors and active sensors on the wearer. Apparently it doesn't have any limitations on the number of tracking points and it has absolute addressing on each tracking point so the usual issues with optical tracking is not so much of an issue. A basic setup will cost around $1000, in basic hardware costs, which is really cheap for this kind of equipment.

Now we only have to wait for it to be commercialized. Hurry up please :)

So I've always been interested in electronics and all kinds of gizmos, but lately I've been playing with the idea of trying to come up with some cool stuff myself. Not quite sure what I'm going to make yet, but that'll come later.

There's a lot of great resources and inspiration out there, like Instructables, Hack a Day and Make Magazine. I know I would like to have a closer look at the Arduino and make something out of that, but since I haven't tinkered with electronics for years I found it best to start simple and refresh the basics. Sparkfun has a great tutorials section where they go through a bunch of stuff ranking simple to advanced.

There are basically two standard ways of making your own PCBs. The first is to use a laser printer to print out your circuitry and then transfer the toner to the PCB, clean it, etch it (using the toner as a mask) and then remove the toner with acetone. The second also uses a laser printer, but printing on a transparecy instead, using that as a mask while exposing the PCB to UV light before etching it. The main issue with both these methods is that you have to own a laser printer and one that uses enough toner to make the traces black enough that either etching fluid or UV light destroys the fine detail.

That got me thinking. Why isn't there an easier way of creating your own boards with as few steps as possible? Wouldn't it be nice to be able to draw up the ciruit using some form of laser?

Googling a bit I came over the macetech.com blog that proposed to use a laser to remove black paint from a PCB. The paint would take the place of the toner so you can skip that step entirely. Make has a similar article doing the same thing. As both of these posts mention, this method is not perfect. First of all using spray paint doesn't guarantee an even distribution of paint and the laser doesn't remove all of the paint as well - leaving you to wash of the rest. That again might destroy the any fine traces in the design. However; they both also mention that this method creates superb detail!

Taking it a step further a Polish research group came up with a way of doing Laser Direct Imaging (LDI) using UV laser a telescope and an optical scanner. Since they use a UV laser they rely on UV sensitive PCB's removing one more step; the toner/paint. The process is described in detail here and it was mainly created to be able to do ultra-fine traces for the circuitry of the future. In that aspect they succeded and while it's great a sollution it's not entirely feasible for us mere mortals.

Francois Dubrulle at HoloLab has made a UV photoplotter that does exactly what I want. Although his web-page lacks on details it shows it's possible. The main issue with this design, as he mention, is the low power of the laser (1mW) which limits the the speed of the print and it takes as much as two hours to finish one board. Doing prototyping and not volume production I don't mind waiting a bit to have PCB's produced this way since I can do something else in the meanwhile.

There are a lot of resources on making your own CNC mill and a 1mW UV diode has become pretty cheap so making one of these for myself should be feasible. Taking it one step further one could use the same CNC, switch out the UV lightsource with a laser and use that to make the screens for the solder and the laquer.

Maybe this will be my next project?
Posted by Atle at 17:43 2 comments:

Came over this one recently. It's a commercial for the new Philips superwidescreen TV's. Very impressive indeed!

Email ThisBlogThis!Share to TwitterShare to FacebookShare to Pinterest
Labels: vfx

A couple of days ago we created a new blog at our company, Stripe, where we plan to get you a little inside view of what goes on behind the scenes at the studio. Check it out at blog.stripe.no :)
Posted by Atle at 12:55 No comments:

I'm heading for the combined birthday party of some friends of mine, but I've been promised they have stocked up on candle lights so we should be ok :)

Yes, I'm afraid so. I promise I'm not going to make this into another book blog, but I'm still reading like crazy. Yay! Found myselfe å new favorite author - well, not favorite favorite because that would be Neil Gaiman, but while he's writing my next favorite (TM) book I have to read something right?

So I've picked up Neal Asher for the first time... well, now I'm on book four so thats not entirely true anymore ;) I have to say I love this guy he's such å great writer! His style kind of reminds me of Richard Morgan - in a good way :) And yes, there's tons of raw violence so not for the faint hearted.

Email ThisBlogThis!Share to TwitterShare to FacebookShare to Pinterest
Labels: Books

What I've been reading lately

Well, I've been reading quite a lot this fall and winter. It usually varies a lot how much I read, but when I'm in the mood I can consume quite a number of pages in a short amount of time. 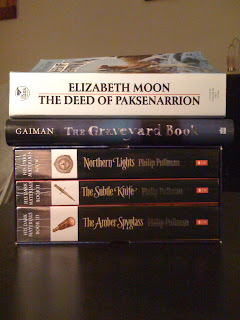