Not much progress to show, but on Wednesday I sanded down all the parts - which took about three hours by myself. Before painting on Saturday I also had to get off all the dust before I gave the parts another coat of primer. The larger surfaces are fine, but the ends sucks up primer like there's no tomorrow. So far I've used three 500ML boxes of primer and I'll probably need at least one more before I'm done.

According to the build descriptions at renaissance-engineer the feeder assembly should have more holes than this or am I missing something?

edit: I found the answer to my question on the SUMPOD forum: http://www.sumpod.com/forum/post/minor-problem-feeder-parts
Posted by Unknown at 20:58 No comments:

Today my friend Tom dropped by and helped out with sanding and prepping of the parts that got their first coat yesterday. This is definitely the most boring part of the assembly so thanks a lot Tom!

The first box of primer was almost out so we were lucky the last box was just enough to give all the small parts their first coat and the box it's second. Tomorrow I'll need to go buy another box.
Earlier today I came over the Renaissance Engineer blog which, lucky for me, has a complete assembly guide for putting together the SUMPOD. He's not quite done with the wiring instructions yet, but they are coming. I'll probably use the rest of this week to get the painting done anyway so there's no rush.
Posted by Unknown at 22:22 4 comments:

We've been quite busy with work the last week so I haven't been able to do anything more with the SUMPOD build until today. So this is my weekend project. Get all the MDF parts cleaned up and painted.

The prepping was quite easy as the parts looked fairly good from the start. All I had to do was go over all the edges with 240-grit sanding paper. I also used an X-Acto knife where the spindle had left small deposits of wood/paper. I imagine either the tool-bit was a bit dull, the routing-speed had been too high or the MDF too soft. Anyway, some cleanup should be expected in any project :)

The painting was pretty straight-forward and I got confirmation what I've read on other blogs - MDF needs a lot of paint. I ended up using almost a full spray-can (500 ML) of primer on the first coat. I seriously hope I don't have to use that much for the next two coats.

Tomorrow I'll try to get the rest of the parts primed and also apply a second coat to the main body.

When Intel officially released Knights Corner earlier this week the first thing that hit me was how is this going to affect 3D rendering. That being the most time consuming or machine intensive part of visual effects for TV or movies.

Sure there's been specialized hardware that speeds up this process before, but there's always been drawbacks like only working with one particular render-software. Probably not the one you favor. Then there's the GPU way which use CUDA or OpenCL to harness the massively parallel processor of your graphics card. Several render-softwares, like V-Ray and Mental Ray (iRay), supports GPU rendering to a varying degree, but the main issue here is that your video RAM limits what you can render. Most video cards today have between 1.5 and 6GB of DDR3 RAM which can handle simple scenes, but whenever your scene passes this limit you have to start swapping information to regular RAM and most of your speed gain will be lost. Geometry in itself is not that heavy, but start layering textures you'll soon run out.

So why is Knights Corner any better? At the bottom of it Knights Corner is an x86 part, only with 50 cores and from what I can glean from the press release you don't have to re-write any of your code to utilize it. Just enable a compile flag and re-compile your code and your good to go. This way we can get support in most of the major render-software easily - which is the first step. Sure there's going to be optimization issues - for example the ring-bus architecture which might not be optimal for this kind of processing.

I for one will be looking forward to next year when we might, or might not, get access to some actual hardware to test.
Posted by Unknown at 19:35 No comments:

DIY 3D printing is all the rage these days and a while ago I ordered one of my own. Yesterday I finally received the SUMPOD so today it was time for unboxing! At first I thought the box was very small, but when I opened it up I was surprised by how much there was inside.

First step was to lay out all the parts and try to get some feel of what I have gotten myself into - after all I'm supposed to assemble this myself. That includes painting and finishing all the MDF parts as well as soldering the controller electronics and finding suitable software. All without a manual ;)

Before I can start painting I need to do some basic cleanup though.


Looking very much forward to starting the actual build :)
Posted by Unknown at 17:06 No comments: 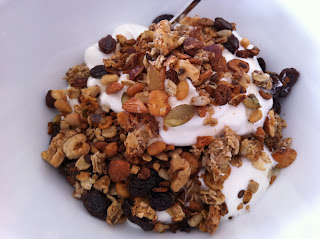 Time for a non-techy post ;) This time home made müesli.

Preparation
Use a sharp knife and chop all the nuts and mix them with the rest of the dry ingredients (except the soy flakes) in a big bowl. Mix the water, oil and lemon-/lime juice in a separate container and stir it in a little bit at the time until it's all evenly distributed.

Prepare two deep pans with baking paper and spread the mixture evenly. Put both pans into the oven at 160-170°C for 15 minutes and then switch around the pans and roast for another 15 minutes. Add the soy flakes, stir around a bit and let it roast for another 5-10 minutes with the hot air fan engaged (if you have one). Be careful that you don't burn the mixture or dry it out to much!

Let cool in pan before storing in a air-tight container. You might also add raisins at this step if you like.

Serving
Enjoy with Türkish yoghurt and acacia honey - or if you you would like to stay away from dairy products; soya milk works very well as well.
Posted by Unknown at 20:29 No comments: