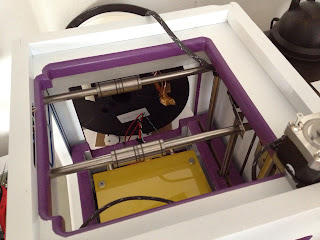 Posted by Atle Krogstad Berg at 15:54

I too have ordered a new print head from QU-BD and it has been despatched.
However, I'm going to is it on my bowden cable set up I have now.
I'll just be using the hot end components with my own extruder.

Could you not have attached the Sumpod hot end to a metal plate instead of the MDF? This could have helped Peek cooling better?

I received mine this Saturday (#114) and have just now finished assembling it. Looking good so far! I think it should work fine with a bowden setup as well - although I like the idea of having the drive mechanism as close to the print head as possible to remove as much slack in the system as possible.

Although I never fired it up I did try out fastening the Sumpod hot end directly - see my next post for details.