Yesterday I got UDK up and running and took Epic Citadel for a spin. Enabling the Rift was as easy as running the level from the editor, open the console (by pressing "~") and typing the following "stereo on" and "hmdwarp on".

Tracking, it seems, was enabled out of the box so nothing else was needed.

The verdict? It kicks ass! The graphics, even though they are made for phones, are very impressive on the Rift. My motion sickness took longer to set in as well. I don't know if it is because I'm starting to get used to the experience, but what helps, for me at least, is to close my eyes when I move around with the mouse - since that is what confuses the senses. Moving back and forth along the direction I look in is not a big issue. 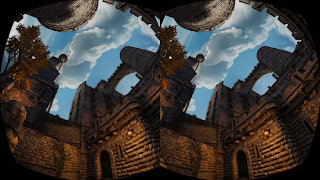 Having two monitors when working with the Rift isn't necessarily the optimal solution since there are issues with vsync apparently. What happens is that you'll get tearing on one of the displays - and that might as well be the headset. Which is something you would like to avoid.

Since I have an iMac on my desk already I figured I'd just install a VNC server on the Windows machine and only have the Rift attached to the graphics card. That way I can control the menus/desktop with a VNC client and then close the connection before I put the headset on. Works like a charm! :)

I don't think the flavor of VNC server matters much, but I opted for RealVNC myself.

Posted by Atle Krogstad Berg at 19:51