Disclaimer: this is a big "do not try this at home"-post as it involves flammable gasses and explosions, so don't! Wait, who am I kidding - you're totally going to try this at home aren't you... just don't say I didn't warn you when you stand there missing an eyebrow!

So, we recently did a project at work where we needed some fiery effects to spice up a car shot. To be precise we wanted the car, a CG rendered Lamborghini Aventador, to have exhaust flames - and really cool ones at that.

The usual route would be to create these digitally using a variety of tools, for example Trapcode Particular. As we had just a week and a half to produce the whole spot we had to be creative to make sure we finished on time. That meant going old school and shooting a practical effect in camera - allowing us to bag that particular effect in 20 minutes and focus on the rest of the 3D and compositing instead. 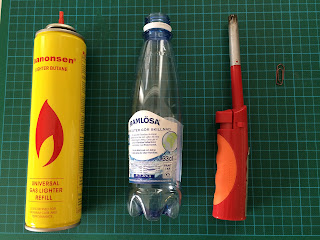 What you need
1 x small plastic bottle. We used a 33cl bottle from Ramlösa. You can go bigger, but this was plenty to get the effect we were looking for.
1 x refill canister of Butane gas (ie lighter fluid). You probably can use a regular lighter as well, but you'll need more time to fill the bottle.
1 x lighter, preferably the "long nose" or "expanded reach" kind. If you have long matches that'll work as well. The important part is to keep your fingers safe.
1 x roll of gaffer tape to anchor the bottle to something sturdy so it doesn't shoot off when ignited.
1 x needle, nail or piece of steel wire. I used a paper clip.
1 x pliers to hold the poking device (see previous)
1 x camera on tripod
1 x dark room
Enough safety glasses for everyone present

Construction
There's not much too it really. Holding the nail in the pliers heat it using the lighter. Then, quickly, poke a hole in the bottom part of the bottle. You might have to reheat the nail a couple of times to be able to expand the hole so it becomes big enough.


Execution
First of all make sure you are in a well ventilated room where there's nothing flammable.

You'll need something sturdy and heavy enough to fasten the bottle to. This way it won't fly away when you ignite the gas. Gaffer tape is nice to use for the fastening. If you get the matte black kind it can also be used to make sure the bottle doesn't reflect any of the light - making the compositing easier later on.

Set up your camera and frame your shot. Now we add the gas.

Insert the butane gas nozzle into the hole you made earlier and give it a quick push. You don't need much since it will be liquid when pushing the container down onto the bottle. To much butane will not create a bigger explosion since the air/gas mix will be wrong resulting in no explosion at all. Put the butane canister somewhere safe away from everything.

Now turn on the camera, turn off the light in the room and set the flame from the lighter to the small where you added the gas. If you got the mix correct you will hear a satisfying pop and see a bluish flame. If not you might try to add some oxygen. A bicycle pump should work. Use the small hole for this as well. Keep going until all the gas has been burned away.


Before trying again you have to add fresh oxygen by using the pump for a little while more. Add more gas, light, retry.

Only steps left is to choose best part of shot and add to comp. I'm not going to go into that part here since it's fairly trivial.

And the final TVC

Posted by Atle Krogstad Berg at 15:56